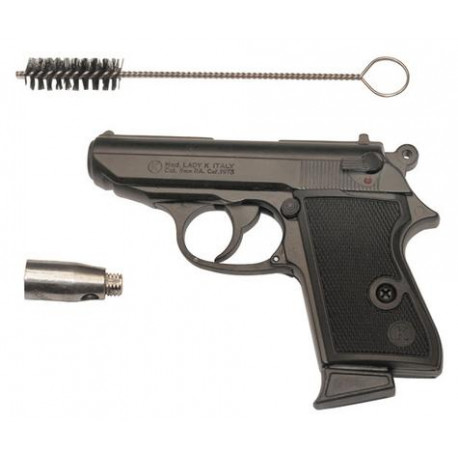 If you're not a pistolero, the revolver is a good choice for a home defense handgun. There's less to go wrong and they're more forgiving of a lax grip. The self-loading pistol relies more on your grip

Dimension 214x140x30mm . Weight 1.22Kg
If you're not a pistolero, the revolver is a good choice for a home defense handgun. There's less to go wrong and they're more forgiving of a lax grip. The self-loading pistol relies more on your grip to function properly. Being limited to six cartridges is hardly a concern. An intruder frets that you might fire the first one.

Okay, you're buying a handgun because you want one in the house. Your home is your castle. You're not going to tolerate some lowlife violating your sanctuary. Good for you. But how much time are you going to spend on the range learning how to handle that handgun? Suppose you find a local club conducting a basic pistol course, or 'handguns for housewives' training. How often will you go back to the range for practice?

If you are unfamiliar with your handgun, you won't 'look good' with it. You're going to exude an aura that shows your lack of confidence and that can make an adversary aggressive. On the street, muggers pick their victims by such simple signs as nervousness, walking furtively, appearing unsure of yourself. If another passerby is walking tall and confidently and he looks like he can take care of himself, which of the two will the mugger attack?

Since you're a hunter, you're obviously more familiar with your shotgun. You function it instinctively. It feels familiar in your hands. You show confidence in yourself and the burglar spots it like a neon sign. And it's much easier for the sometimes shooter to point a long gun than a handgun. You're more likely to hit the target and you know it. Besides, a shotgun is far more intimidating than a little handgun.

My answer regarding the choice of a gun for home defense is, 'Buy yourself any second hand pump shotgun and have a gunsmith chop the barrel to 18 or 20 inches.'

It's an unfortunate sign of the times that people feel threatened in their own homes. You can avoid going to places where you're vulnerable but you can't avoid going home.

29 other products in the same category: