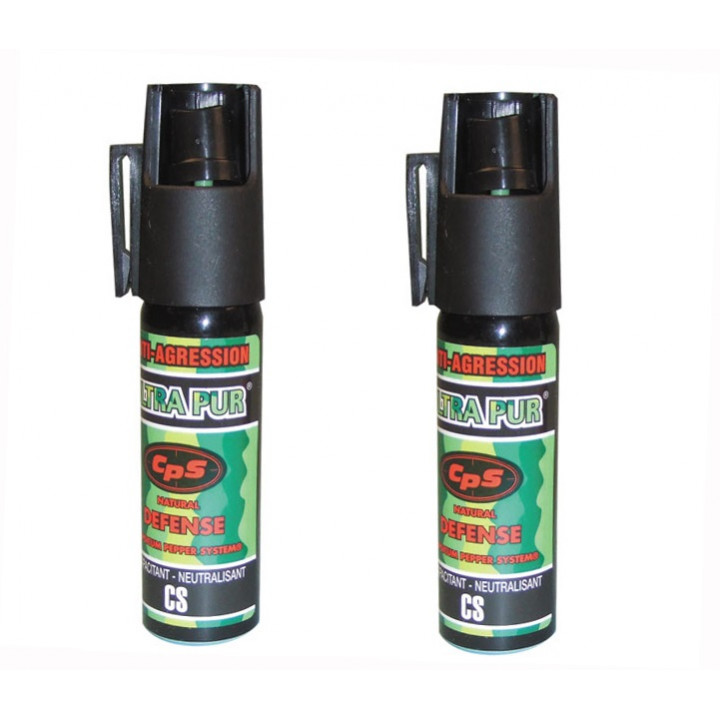 The present insecurity obliges one to think of methods of self defence. The weapons, which we offer, will allow you to protect yourself by neutralising rather than injuring your attacker. None of them

The present insecurity obliges one to think of methods of self defence. The weapons, which we offer, will allow you to protect yourself by neutralising rather than injuring your attacker. None of them needs any training or undue strength to use. All these weapons are simple to use, small and lightweight, easily slipped into a pocket or handbag. A defensive aerosol, which uses a paralysing CS gas or gel means active self defence. The nozzle of these aerosols is designed to direct a jet of gas or gel towards the source of attack which, once contacted, is immediately put out of action because when spread over the face, the CS attacks the nerve endings, forcing the eyes to shut involuntarily, giving a burning sensation and rendering co-ordinated movement impossible. These symptoms disappear without trace from 20 to 40 minutes. The CS exists as a gas or a gel. With the gas, there is no need to aim, however under certain circumstances (confined spaces, discos, bars, shops) it is preferable to use a defensive gel, which liquefies instantly on contact with the skin and clings to it, avoiding contamination of the whole room. The latest defensive gases are the pepper based aerosols which are even more effective. 6th category weapons are freely on sale but are forbidden to be carried (except when authorised, declared or with a legitimate motive). Extract of the Official Journal October 8th 1995: tear gas aerosol generators or incapacitates based on CS (orthochlorobenzylidene) with a greater than 2% concentration and whose filled volume is greater than 100ml or whose instantaneous flow rate at the nozzle is greater than 60g per second measured at an atmospheric temperature of 20°C are classed as 6th category in application of paragraph 2 of the aforementioned 6th category of 6 May 1995. Transport of aerosol by air is forbidden. You need to make a declaration of dangerous goods.

Pocket or handbag spray aerosol containing pepper gas. An anti- aggression system which attacks the nerve endings, gives a burning sensation and makes co-ordinated movement impossible. Do not damage the ozone layer. Range: from 2 to 3m. What is Pepper Spray ?

OC is a derivative of HOT CAYENNE PEPPERS and is the newest defensive spray agent. It is not an irritant like the tear gases, but an inflammatory agent. Contact with mucous membranes (eyes, nose, throat and lungs) will cause IMMEDIATE dilation of the capillaries of the eyes, resulting in TEMPORARY BLINDNESS and instant inflammation of the breathing tube tissues, cutting off ALL BUT LIFE – SUPPORT BREATHING. OC will not deteriorate with age and unlike the tear gasses, WILL NOT CAUSE LASTING AFTER EFFECTS.
One of the biggest misconceptions about pepper spray is that the higher the percentage, the hotter and better it works. In most cases this could not be further from the truth. Most of the best, fastest incapacitating sprays in the world are from 2%-10%. The lighter the fluid, the faster it penetrates the membranes. The percentage has nothing to do with the actual SHU or ''hot'' in the spray. Also, thicker sprays can inflame the skin area more and last longer with this unnecessary inflammation. A good spray will put the attacker down and out allowing you to escape or take control of the situation.
OC has proven itself to be the ABSOLUTE BEST DETERRENT available for attacking dogs and wild animal control. Another advantage of OC is that it is not volatile and will not emit a lot of fumes like tear gases.
The term OC ( oleoresin capsicum ) is a horticultural term which refers to chili peppers. There are many different kinds of chili peppers ranging from jalapenos, chiletpin, and cayenne to habaneros. They all have one thing in common. They all contain a substance that is very powerful an alkaloid called capsaicin ( cap-say-a-sin ). Just a single drop of tasteless and odorless capsaicin in 100,000 drops of water and the heat can be noticeable. In fact, capsaicin can be detected by humans at one part per ten million!
Capsaicinoids are produced by a gland in the pepper’s placenta, which is the top partition just below the stem. This is also where the seeds are attached. The placenta is about 16 times stronger than any other part of the plant, any OC spray worth its salt will use its active ingredient made from this part.
Back in 1912, a pharmacologist named Wilbur Scoville came up with the standard for measuring the power of capsaicin. Called the Scoville Organoleptic Test, it was needed to calculate the temperature of peppers used in many pharmaceutical products of the time ( such as ''Heet'' which was used for the relief of sore muscles, arthritis pain and muscular sprains). Scoville measured the ground pepper into a mixture of sugar, water and alcohol. Then, a panel of five tasters sipped the mixture and gave it a grade: it took a majority of three to assign a value.
Today, the value is established through high technology, a computerized method called high-performance liquid chromatography. The pepper scale ranges from zero Scoville unit for a bell pepper to 5,000 or so for a jalapeno to a whopping 200,00-300,000 for a habanero! Pure capaicin is 15,000,000. The oleoresin capsicum used in a superior pepper spray formula such as FOX LABS is derived from the hottest peppers and further processed and refined until the heat rating is 5,300,000 (5.3 million!).

21 other products in the same category: